You already have a saved search with that name. If you save, you will overwrite the existing saved search. Are you sure?

I sat down with Melissa for an early dinner at The Cuckoo's Nest (@cuckooalbany). I felt autumn for the first time this year as I waited to meet her outside on the busy Western Ave. We headed back towards the dapper L-shaped bar, and while I ran to the restroom to wash my hands, Melissa had already ordered a glass of Cherry Pie wine. The beer options were extensive, local and seasonal. , I decided to try a Dogfish Head IPA I hadn’t yet had called Flesh & Blood. Weird name, delicious taste. No quicker than it took for my IPA to arrive, Melissa had dove into a story about a trip to San Francisco that happened about 10 years ago while she was completing her dual master’s at SUNY Albanyin Counseling and Psychology. My first question was how did a woman with those interests become a successful agent in real estate? But I bit my tongue and held out, because the story was shaping up to be a good one. She had been bartending at the Goldfinger and a few co-workers decided they were in need of a sanity break. They sprung on some cheap airfare with the sunny Pacific California coast in mind. The plan was to fly into San Francisco, drive south to San Diego, then fly back home to Albany in 10-days flat.
"Devin drove down this windy coastal road for 10-hours until we made it to San Diego." "It was probably 10-hours. I get really car sick."
Honestly, I couldn't quite connect the dots regarding the urgency or need for her to tell me about this trip. After all, we had only met a few minutes prior. So far, I had only been able to gather that we both had been to the state of California, but only one of us knew what PCH (Pacific Coast Highway) stands for. Conveniently enough, our appetizers arrived. I welcomed the distraction of delicious food, and took the opportunity to dilute my ignorance in not comprehending the point of her story. I chewed thoughtfully then waited for her to take a bite before asking:
"So -- pretty cool trip?"
"Hah! Well that's why we're here! Devin, the driver, opened this place."
Thank goodness the food tastes better than a foot. I was stoked she had brought me to her old stomping-grounds, a place that had importance to her, a place with roots!

Quick interruption: The Grit Tots & Fried Green Tomatoes?  The tots came with this gravy that made me forget it rained all Summer. Seriously. 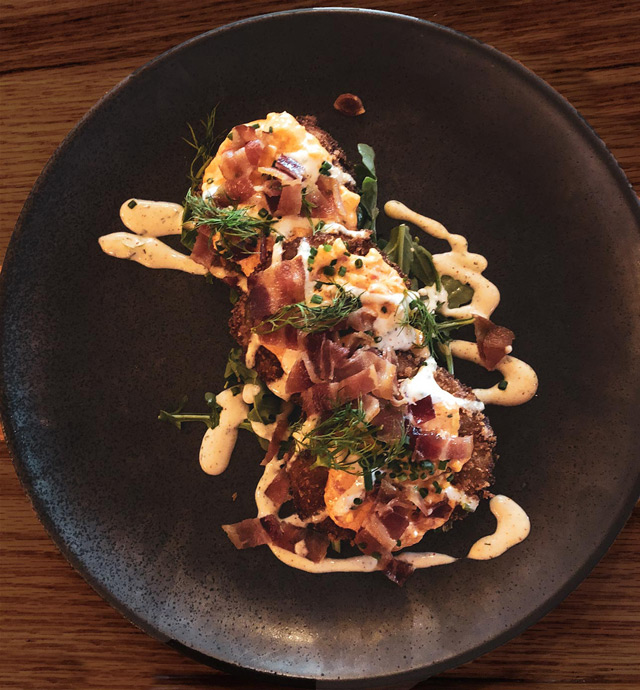 To say my curiosity had been quelled would have been a lie, in fact, I was brimming with questions. What transpired after Melissa acquired both of those prestigious MBAs that led her to change her course and become real estate agent? An incredibly successful real estate agent to bat! Long answer? Read her biography.  Short answer? A size seven shoe kick to the face. The year she graduated, the Capital District was in short demand and high supply of educators and counselors.. The chances of her resume being reviewed were one in one hundred twenty, and if by some miracle she was selected, she would be placed in a pool with twenty nine other, just as prepared interviewees. With what now, after meeting with Melissa, I recognized as tenacity, she was finally presented an offer. Initially, it didn’t bother her that the school was over an hour away, the starting pay was $8/hr. and the position was more focused in education than counseling. . She took it with a grain of salt as a foot in the door, and committed herself full-heartedly to doing the best she could in teaching at-risk and struggling youth. Over the next year she hustled, beginning her day of teaching before the sun rose at 5:00, then leaving the school at 3pm, to run home and hopefully get a bite to eat before starting her 7-midnight shift bartending. I was floored with the notion of the shift in focus and compartmentalizing it must have taken her to take on so much in one day. If she could handle all that, I believed she could have been successful in any career she chose. So why real estate?
“80-hours a week is one thing, but 18-20 consecutive weeks was just too much.”

So she turned to her mentor and former college professor for advice. He happened to know of a local real estate brokerage in need of an Office Admin. The position would provide her with stability, a livable salary and down time. It was tempting. However, she wasn’t ready to sideline her goals just yet, and held off on the transition.
A few weeks later a fight broke out at her school that required her and a few other teachers to intervene. With quick action and teamwork, they were able to snuff out the fire. However, an ember still fueled from the dispute, sparked. Or in her case, kicked. Directly in her face. After a few days of rest she called the number on the card her mentor had given. The story was less juicy from here, but now that I understood her work ethic and courage to pursue new beginnings, I had a good idea of how, after learning the ropes, she quickly transitioned from her admin position to the role of a Residential Real Estate Agent.

The rest, they say, is history.

Most people go their entire life sans a kick in the face. So far be it from me to pass judgement on anyone deciding to table a 10+ year pursuit for perspective. Motivation, I believe, is something most people need and are constantly seeking. The antidote? Discipline. Melissa has an unprecedented level of discipline. Making motivation irrelevant.

Fast forward five years. Add a son, then a daughter, and you have yourself the Killion tribe. Enter stage from left: Motivation. I mentioned she's a single parent, right? 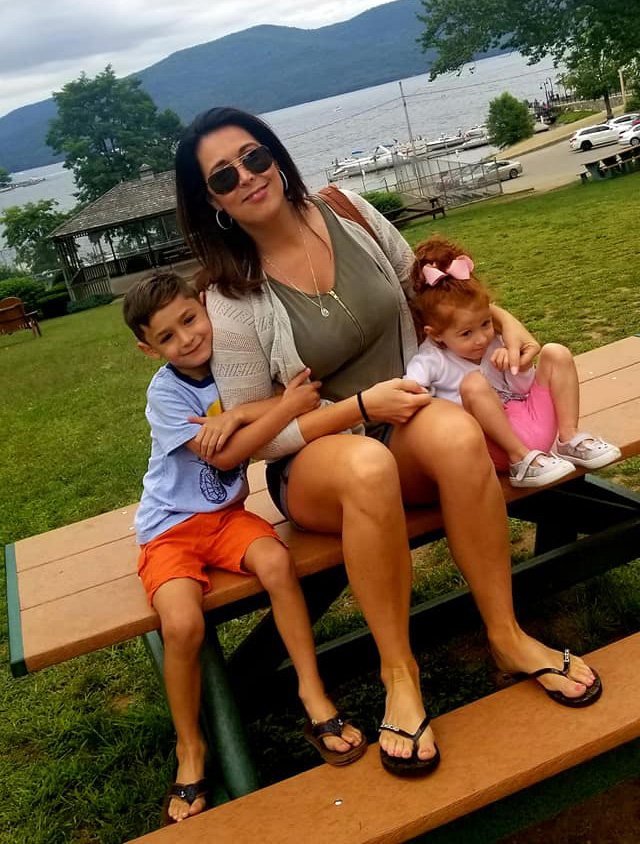 Growing up near Lake Tahoe, I'm no stranger to camping. Nothing resets the soul like a few days in the wilderness. So, when Melissa started telling me how her son desperately wanted to go camping – my ears perked up. She explained how she has little, nay, very little camping experience. Nonetheless her son wanted to camp, and she was determined to make it happen!   “The only fire I can light is the one under my own tush.” Hah!
I thought - but she has an MBA in education.  I can't stress enough how utterly baffled
and impressed I was with the person who pulled off this mental heist years ago. totally serious.
3. The third time she used that word and I promptly demanded her to speak English. Heck, my IPA was starting to                    think she was a little buzzed and became unsympathetic.      "Excuse me - Glamping?"  I said atop the tallest soap box on Earth. "You mean camping - with a C?"      "Yeah, no.. With a G. It's glamorous camping."  "G lamping. " Let me be clear.  When she finished her definition and story, there wasn't an ounce of diplomacy in my finger-pointing laugh. Which is ridiculous in and of itself that I felt a level above her solely on the premise of preferring to go "without" for a few days every now and then.  #highsociety Alas, after hopping off my high horse barefoot, dirty and no more the wiser. I had to admit that the idea has potential. For people who grow up in urban environments, or busy moms like Melissa, it's genius, and as it turns out, way more common than I ever would have guessed. Moreover, it's a reveal of her aptitude. Taking something completely foreign and producing an incredible experience and outcome. Her story about glamping shed a new light on Melissa for me - how she applied her discipline to get the most out of life, not just in a professional capacity, but on a personal level as well. As a self-made successful agent, and a determined single mom, Melissa has acquired a lifetime of emotional and interpersonal skills, in combination with a work-ethic that is exemplified in her success in both in the office and at home with her family. As we sipped our last remnants and I scraped the final savory bits of gravy from my plate, I realized that I would be hard pressed to replicate this awesome of an afternoon anytime soon. The food and service were equally incredible, the Cuckoo's Nest absolutely killed it. Another reason why Melissa is such a rock-star real estate agent: She knows her town.
Melissa has been awarded the title of "Top Selling Agent" 3-years in a row, most recently with CM Fox Real Estate. Yet her success resonates in even greater ways, and I am sure, having gotten to know Melissa, that there is more to come.
#glamping

You message has been sent!

Send us a Message

Success! Please check your email for instructions on how to reset your password.

We will never sell your e-mail address or phone number under any circumstances.

Free and complete access to Saved Searches and more

Thanks! Your account was created successfully. You will receive a confirmation email from your agent shortly. Enjoy access to saved searches, favorite properties, and more!

We will never sell your email address or phone number under any circumstances.
By registering, you agree to our full Privacy Policy

Or reach out to the team for help:

Thanks! Your account was created successfully. You will receive a confirmation email from your agent shortly. Enjoy access to saved searches, favorite properties, and more!

We will never sell your email address or phone number under any circumstances.
By registering, you agree to our full Privacy Policy

Or reach out to the team for help: